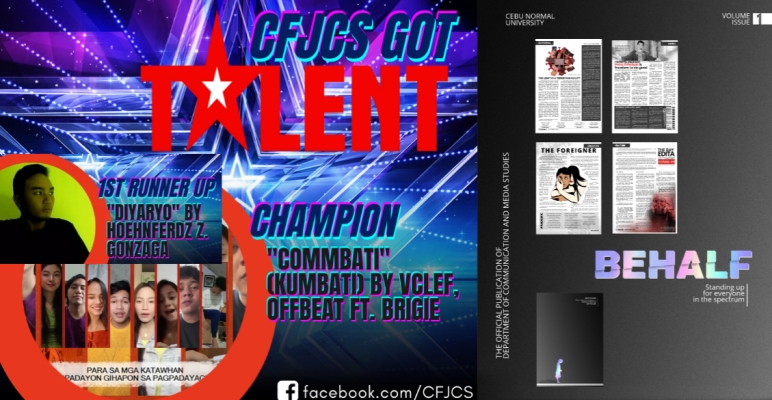 Despite the physical barriers and connectivity issues, communication students from Cebu Normal University bagged the top awards in the digital publication and Campus Got Talent contests held in connection with the celebration of Cebu Press Freedom Week this year.

“Behalf” magazine, the school’s entry, earned the collective nod of the judges to cop the award for Best Overall Publication, besting the entries from the University of San Carlos (The Trailblazers) and Cebu Technological University (The Vanguard).

Behalf was also adjudged Best in Editorial for “The Light in a Terrifying Reality” and “Arvin and John Dale,” which tackle the need for the media to be more active in pursuing the truth for readers in this time of health crisis and the pandemic’s impacts on students and pupils going through blended and online learning. The accompanying editorial cartoon was also hailed the best among the entries.

The magazine also won Best Feature for “The Day Edita Contracted COVID-19,” which narrates the experiences of veteran nurse Edita Sanchez when she got the virus, and Best in Creative Writing for “The Foreigner,” a story about a mysterious woman from China who kills an entire family in just months, only to be killed by her supposed last victim in the end.

It also emerged as the Best in Graphic Design and won second and fifth places in news writing for “Go digital, media outfits urged” and “Priest to journos: Press freedom is freedom to do good.”

Gaviola said she was happy that despite it being the first time for the team to come up with a magazine in about five days, all the hardwork still paid off in the end.

“I’m elated and still kind of surprised with the outcome. I’m happy that I was able to produce results despite being a newbie with editorials. I’ve only written them twice for a subject requirement, which was why I was really nervous that I might disappoint everyone and tarnish CNU’s straight-A records when it came to journalistic contests,” she said.

Gaviola said the team was thankful to Destacamento, a faculty of the department, for guiding the team all throughout the competition.

Destacamento, who also works as assistant news editor in The Freeman newspaper, attributed the victory to teamwork.

“From the very beginning, our goals were clear. One was to make CNU proud and the other was to make people realize that Cebu is still teeming with young, aspiring journalists who are ready to defend press freedom,” he said.

Meanwhile, the collaboration between VCLEF and Offbeat bands, composed of CNU communication students, together with fellow Normalite Brigida Gerzon, resulted to the original song “COMMbati,” which won first place in the Campus Got Talent.

Gerzon said they wanted a song that would make the people understand the crucial role of the media during these tough times.

“At a time where transparency is needed the most, duty na nato mga journalist to seek and provide information for the people,” she said.

Another Normalite, Hoehnferdz Gonzaga, also finished second with his original composition and interpretation of “Diyaryo.”

Dr. Joseph Elvir Tubilan, chairman of the CNU Department of Communication and Media Studies, said the recent feats once again showed the competence of CNU students.

“For the last two years, we were the back-to-back champion in broadcasting competition and this time we are the over-all winners in Digital Publication and CFJCS Got Talent. This proves that our students are doing well and competent not just in one specialization, but also in other aspects in the field of journalism plus we have multi-talented students,” Dr. Tubilan said.

“I am so proud and honored for this feat that gives pride and prestige to CNU as one of the State Universities and Colleges. I hope that this will eventually pave the way for CNU BA Communication to become one of the leading journalism and communication programs in the country,” he added. (Leonel B. Quillo, BA Comm. – Journalism – 3)