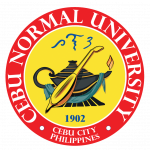 The symbols on the seal attempt to merge Philippine and Western influences which have helped to shape the school.​

GOLD symbolizes the shining metal of character, integrity, honor, loyalty, perseverance in the face of adversity and humility in the acquisition of knowledge.

CRIMSON stands for the courage to grow, to aspire, to create, to innovate, to take risks in defiance of an age-worn undesirable attitude that opposes change and growth.

THE LAMP – The design of the lamp is Western, and symbolizes the light of knowledge. Likewise, since it is a universal symbol for education, it is prominently featured on the seal because the university started as a teacher-training institution. It also stands for the nursing profession, which is represented by the lamp of Florence Nightingale.

KURYAPI – is the Visayan word for the native lute, usually made of wood with 2 strings (occasionally 3). It was common throughout the islands before the Spanish conquest and was customarily played by men. It symbolizes studies in music, arts, and letters, with the all-pervading native soul as an integrating force.

THE LETTERS – The 3 letters taken from the Cebuano alphabet have the following equivalents: C, N, U
The old Cebuano letters were used because this university takes pride in its roots – its Hindu-Malay cultural base and its colorful history.