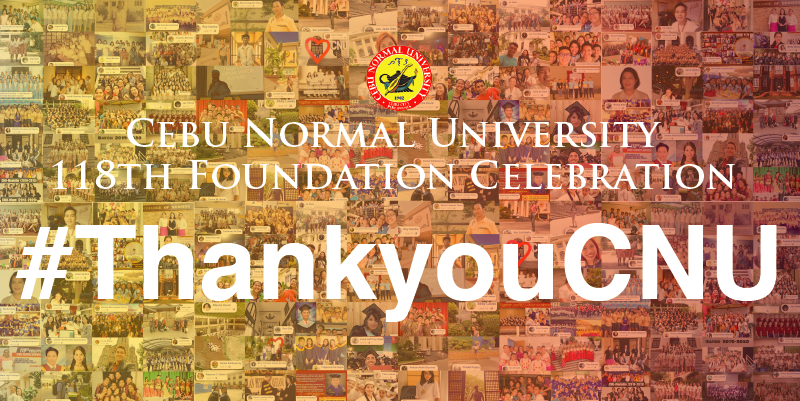 Cebu Normal University (CNU) celebrated its 118th founding anniversary and 22nd anniversary as a University, and as a way for its stakeholders to express their gratitude, they participated in the photo-posting activity dubbed as, #ThankyouCNU.

#ThankyouCNU was launched during the opening salvo of the two-week foundation anniversary celebration last June 15. CNU alumni, students, teachers, employees, and other stakeholders were encouraged to post on their Facebook account their unforgettable memories of/in/about CNU using the said hashtag.

These posts were then compiled and presented during the 118th Foundation Celebration Closing Program that was live-streamed through the CNU Public Information Office (PIO) Facebook account last Saturday, June 27.

Quality education and excellence-cultivation, made colorful by each stakeholder’s distinct experiences, were the general themes of #ThankyouCNU.

Alumni, former educators, and employees have grown and are now practicing in different fields. Their time spent with the University has also built lasting love and friendship among others.

“I will never become who I am today if it is not for all the opportunities that CNU has provided me from the very beginning,” Joselito Tumulak Jr., CNU BS Chemistry-Physics alumnus (Batch 2017) said in his post.

He said that it was in CNU that he met a lot of inspiring mentors that have changed his life for the better and where he met his lifelong friends. He also said that CNU has taught him the value of work and to be resourceful and creative.

Tumulak was a topnotcher (6th placer) in the October 2017 Chemical Technician Licensure Examination. He is now a practicing educator in a private institution.

Julie May Maribojo-Gesta, CNU BSEd-Mathematics alumna (Batch 2009) said that she has a lot of memories in CNU for having studied 16 years in the institution since elementary.

She said that she has joined different extracurricular organizations including the Drums and Lyre Corps when she was in elementary. She also became a CAT officer in high school and a member and soloist of the CNU Chorale in college.

But she said that the most memorable memory she has with CNU is when she met her classmate, who became her boyfriend and now her husband.

“I could never thank CNU enough for honing me to what I have become now… I am continually indebted for all the life lessons you have taught me,” Mary Grace Luna, CNU BSEd-English alumna (Batch 2007) said.

Luna was the first Normalite who qualified for the Ayala Young Leaders Congress (AYLC) and became one of the 80 participants who made it to the final congress in 2006.

She was also the first Normalite chosen to become part of the Ten Outstanding Students of the Philippines (TOSP) in Region 7 in 2007.

Mechelle Canoy, CNU Psychology alumna (Batch 2018) said that she considers herself blessed, thankful, and grateful for having served as a public servant through CNU. She is currently working at the Public Information Office of the University.

She said that she became a person who thrives hard to accomplish her deliverables, who takes the lead in upholding quality in whatever she does, and who always has the heart to serve her clients and colleagues.

“As a teacher in Cebu Normal University for 15 years, I draw inspiration and strength from my students,” Vice President for Academic Affairs (VPAA) Dr. Daisy Palompon said.

A recording of all the events that took place during the 118th Foundation Celebration of CNU can be viewed at the CNU PIO official YouTube channel. (JDF)