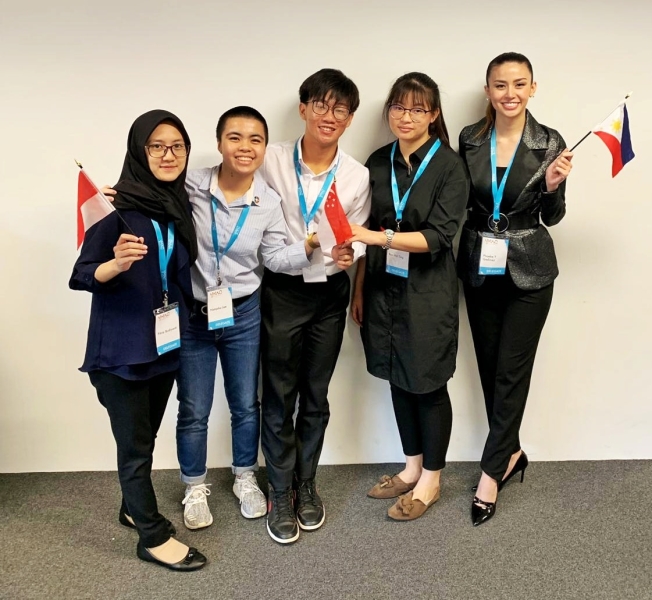 The University, which has been known for being a powerhouse of talents, has been all over the Philippines for academic and extra-curricular activities alike. But this time, it has exceeded expectations and broken barriers – it brought the prestige on a worldwide scale.

The Youth Models Asian Conference (YMAC) is a tertiary conference that emulates an ASEAN (Association of Southeast Asian Nations) Summit which is participated by China and four ASEAN countries – Indonesia, Malaysia, Vietnam, and the Philippines – with Singapore Polytechnic as this year’s host from September 30 to October 2.

Over the three days, the participants were expected to take on the role of ASEAN delegates to discuss economic, security, social, and cultural issues that affect their respective countries and the world as a whole.

Phoebe Godinez, a second year BA Communication major in Film Media student from Cebu Normal University (CNU), was one of the representatives of the Philippines and she said to have looked forward to the event as early as her coronation for Miss Philippine Association of State Universities and Colleges (PASUC) in 2018.

“It was already announced that the winners of Mr. and Ms. PASUC 2018 would get a chance to participate in YMAC prior to the national competition and I was definitely excited for all the opportunities given to me especially the conference since it would be my first time out of the country”, she explained.

During her experience, she recalled that her team, Captain Planet and His Crew, was assigned to expound more on Sustainable Development Goal (SDG) 12 which was Responsible Consumption and Production.

SDGs are 17 global goals designed to answer pressing problems and create a sustainable future for the world.

Godinez said that their SDG mainly focuses on resource and energy efficiency, to which they pitched the solution of creating a Plastic for Food centers where people can come exchange their plastic wastes for food and their group planned to turn over their collected plastics to waste management facilities and recycling plants.

She said she didn’t mind being the only Filipino in her group who were full of Singaporeans and Indonesians.

“I love seeing my new international friends and learning about their cultures knowing that I am also growing as a person”, Godinez said.

Towards the end of the conference, she said that all the participants, including her group, presented their projects in an exhibit and they had a mock ASEAN Summit then a closing ceremony.

“The most important thing that I learned from the conference is cultural intelligence – that learning and adapting to differences in tradition and culture enrich communication and action towards world problems”, Godinez stated as her overall impression of the event.

YMAC was a huge step for the university to get out and be in the international spotlight and this opens up another gateway of opportunities for students which can hone their capabilities and raise their awareness on various issues facing the world today and what are the possible sustainable solutions for these. (Rhina Tabada, BA Communication Film Media 2)