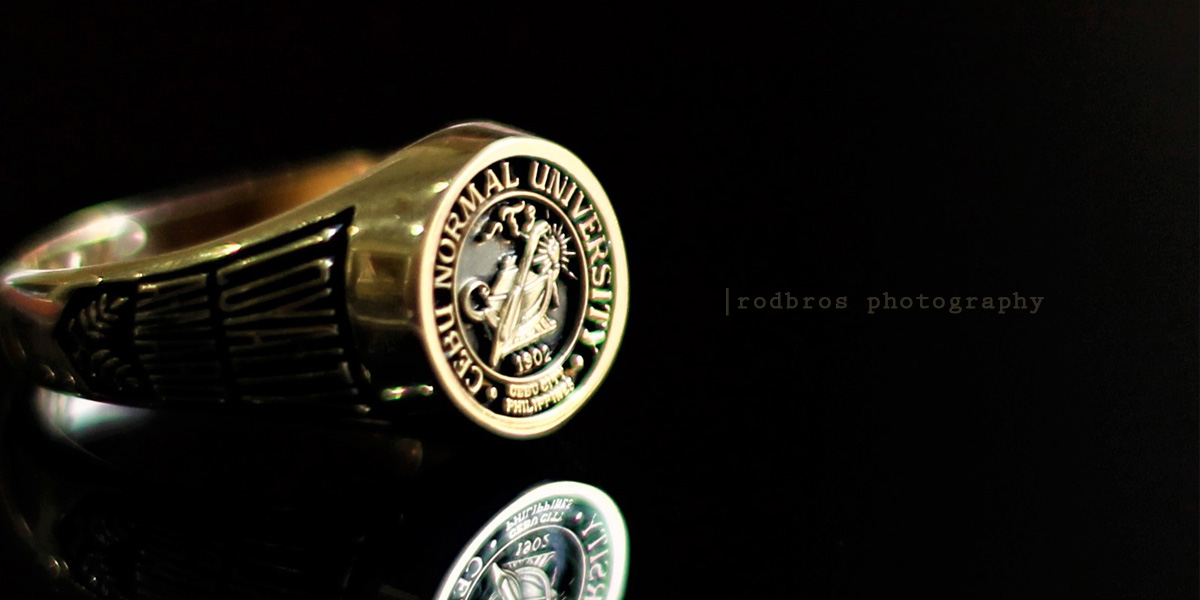 Gold ring awarded to CNU public servants who spent 35 to 40 years working in the University. / Photo by Kim Francis Rodriguez

Cebu Normal University (CNU) honored three of its public servants who spent 35 to 40 years of their lives in the University. Everyone has their own take in choosing the number of years in serving the Normalite community.

Diolito Cortes started working in CNU since 1983 and for 35 years (and counting) as a regular employee has still continued to serve after recovering from stroke in 2010. He started as a watchman and eventually became Security Guard I. Cortes is one of the gold ring awardees who were acknowledged by the CNU administration for their number of years in public service during the closing of Civil Service Commission (CSC) month on September 26, 2019.

“Naningkamot gyud ko sa akong performance nga ang administrasyon makauyon (I have really taken good care of my job so that the administration will approve),” he said.

“Dako ko’g pasalamat sa CNU – sa administration – nga ila kong gidawat (I am very much thankful to the CNU administration for accepting me),” he said after recuperating for four months. He said it was his ambition to work in the government in his lifetime.

“Ayaw lang ko padagana (Just do not let me run),” he said after sharing he is having a hard time walking after his stroke, but he still gives the same service as before.

Cortes said he wants to end where he started as a reason why he has stayed for years working in the institution. He plans to serve as a lay minister in a church as a way of continually thanking God for his second life after he mandatorily retires five years from now when he reaches 65.

Eleazar Ledamo who also served the University for 35 years also started as a watchman in 1984 and rose to Security Guard I. He said that a lot of his significant life events happened since he got employed in CNU including the time he got a girlfriend, married, and had children.

Ledamo said his job as security personnel cannot be underestimated. He is proud that because of it he was able to buy a lot, build a home, and provide the needs of his family.

“Bilang sa security makabuhi ko’g pamilya ug nakapalit ko’g gamay’ng luna (As a security, I have earned a living for my family and bought a small parcel of land),” he said.

Two of his children finished their college education in CNU and are now practicing professionals. He was also able to help his relative and a vendor finish school.

Atty. Dominiciana Bandala has served CNU for 40 years. She started in 1979 as an accountant. She said she used to be the youngest employee at that time at 22 years old. She is the first gold ring awardee after reaching 35 years of service during the last recognition of loyalty awardees in 2014. She has already received two gold rings.

She said that she looks back with gratitude whenever she encounters past presidents when they visit the University.

“I always look back to the people that had helped me where I am now,” she said.

She said she has considered working in government foreseeing retirement conditions and security of tenure in work. She also prefers school because of its lively atmosphere with students. She said she feels safe with its environment.

Bandala is currently teaching in the graduate school. She has also taught in college but has stopped in 2017 after assuming the role as Vice President for Administration.

She likes to impart knowledge, discipline, and motivate students to do well, she added.

All of the three current gold ring awardees have lived to see and serve the seven CNU presidents from Dr. Camilo Aliño until the present Dr. Filomena Dayagbil. (JDF)