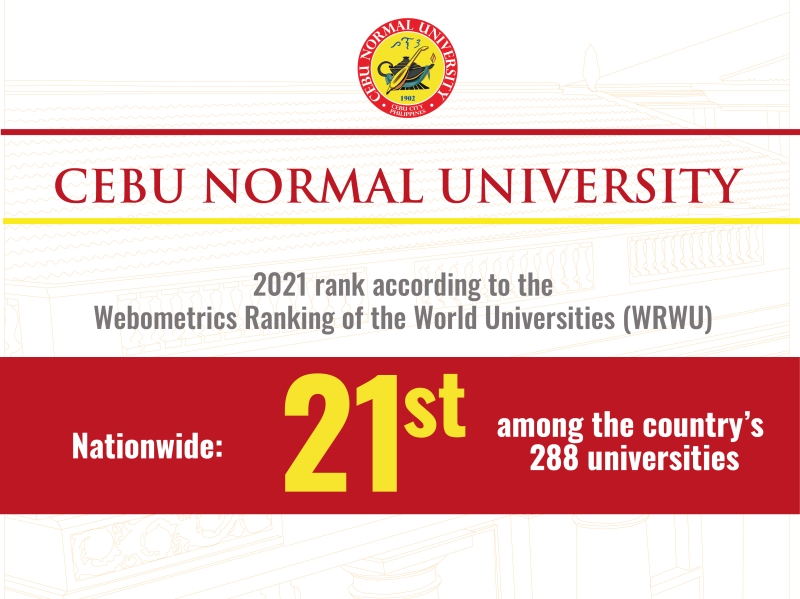 Often securing remarkable spots in the Webometrics Ranking of World Universities (WRWU), Cebu Normal University (CNU) soared yet again as it placed 21st among the country’s 288 universities, marking its highest standing on the said ranking system so far.
During the last editions, CNU landed on 37th place last January 2021 and 60th in 2020, nationwide.
The WRWU or Ranking Web is an initiative of the Cybermetrics Lab, a research group of the Consejo Superior de Investigaciones Científicas (CSIC), which is acknowledged as Spain’s largest public research organization.
According to its website, it aims to promote “open access to the knowledge generated by the university” and improve the university’s web presence and publication; utilizing webometric (all missions) and bibliometric (research missions) variables while considering visibility, transparency, and excellence in its methodology as indicators.
CNU has already clinched recognitions in various university standings in the first half of the year, bagging the 14th place in the World’s Universities with Real Impact (WURI) 2021’s Top 50 universities in Crisis Management and sixth in uniRank’s Central Visayas University Ranking.
Meanwhile, the University of the Philippines (UP) retained the topmost position in the nationwide ranking while Harvard University took the lead globally.
Words by Rena Mae Avila