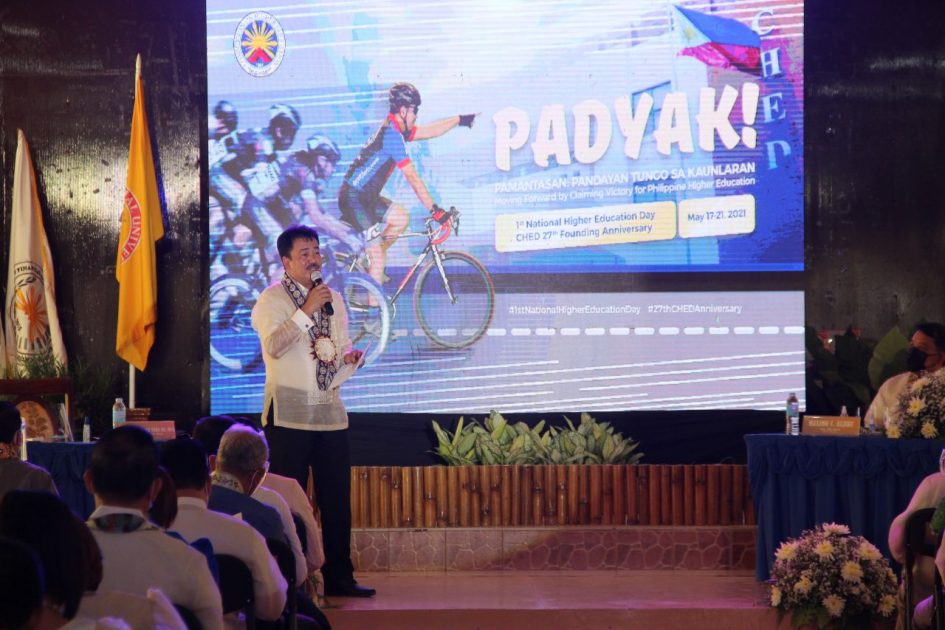 Commemorating its 27th year since founding in 1994, the Commission on Higher Education (CHED) celebrated in double with the declaration of May 18 as the first National Higher Education Day, by virtue of Republic Act 11522.
With the theme, “PADYAK! (Pamantasan: Pandayan Tungo sa Kaunlaran) Moving Forward by Claiming Victory for Philippine Higher Education”, CHED commenced a week-long of regional events across the country since May 17-22, 2021. In his welcoming remarks during the event’s culmination, Dr. Maximo C. Aljibe, CHED Regional Director for Region VII, stated that the event is “certainly one of those spotlighted moments” as stakeholders in the higher education, adding that it deserves a “grand” celebration.
Days before the closing ceremony, webinars for various topics like research and innovations, Philippine Association of Colleges and Universities Commission on Accreditation (PACUCOA) accreditation, and internationalization were held.
TES grantees gathering In his speech, Estevez explained the additional benefits provided to TES grantees following de Vera’s approval on a memorandum earlier this year which gives recipients additional grants for Persons With Disabilities (PWD) students and students who will be taking licensure exams.
“Pag ikaw ay TES grantee at ikaw ay PWD, makakatanggap ka pa ng additional 30,000 pesos … on top of your 40,000 or 60,000 [pesos] sa private school. [Ang mga estudyante] na magti-take ng licensure exam for teachers, makaka-receive kayo ng 10,000 pesos,” he declared.
Subsequently, de Vera guaranteed that the students will persist as grantees so long as they remained their good standing in class and emphasized the role of the youth in the important changes in the nation. In one of the responses from the awardee, Go remarked that life’s greatest equalizer is education, continuing, “The award doesn’t belong to me, they belong to the help, to my people, to the staff.” CNU President Dr. Filomena T. Dayagbil ended the event with her closing remarks, which centered on claiming victories for continuing learning by adapting to flexible learning delivery and for the collaboration and partnership that enabled higher education to thrive, lead, and serve in the new normal.
Words by Mark Aleson Sanico, Mikaela Jane Dagani, and Jhonazel Kiskis