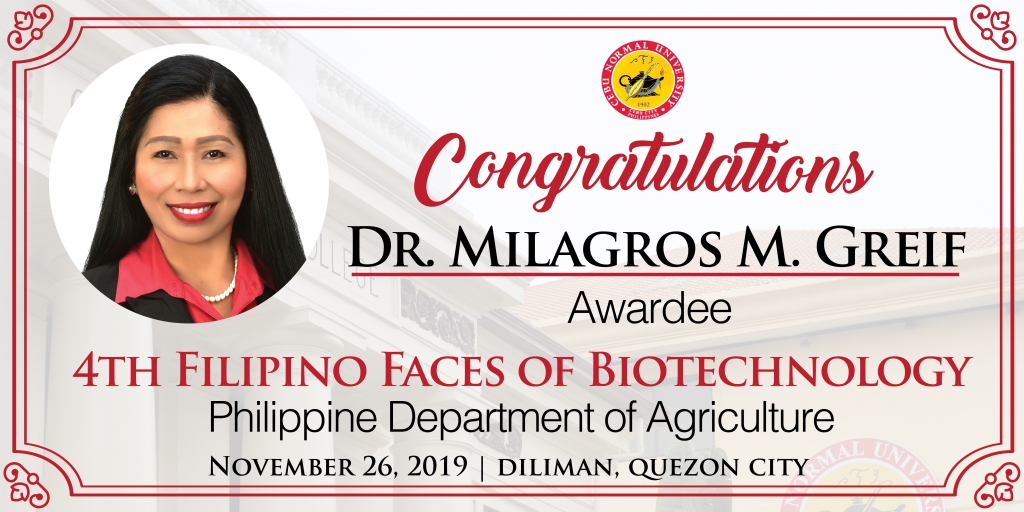 Dr. Milagros Greif, College of Arts and Sciences (CAS) Dean was awarded as one of the outstanding Filipinos in the field of biotechnology.

She was recognized together with nine other awardees during the 4th Filipino Faces of Biotechnology Awards Night on November 26, 2019 in Quezon City. It was given by the Department of Agriculture-Biotechnology Program Office (DA-BPO).

Greif said that she is very happy to receive such a prestigious award on the national level. She said she is thankful to Dr. Daisy Palompon, Vice President for Academic Affairs who nominated her and for Dr. Filipina Sotto, her mentor, and Dr. Laurence Garcia, Center for Research and Development Director who assisted her with the requirements. She is the only Cebuana to receive the award this year.

Greif has been awarded specifically as an outstanding researcher on urban pest control through biotechnology.

Greif said that she has studied mosquitoes for more than 15 years. She finished her masters in Biology specializing the study of insects. She also had her doctorate studies in Germany as a scholar in the field of Biology with a dissertation on biochemical, molecular, and microscopic studies in mosquitoes. After which, she worked in biological control, the use of certain bacteria to kill mosquitoes without the use of chemicals that disrupt biodiversity. She then replicated here in the Philippines what she learned in Germany, and modified it to adapt in tropical weather conditions.

She said that the biological pest control was applied initially in Balamban as part of her extension project.

“We tested it already but we are not yet on the process of selling,” Greif said.

“I think mosquitoes are very interesting insects because they’re very small but the negative impact that they will bring to humankind is very huge,” Greif said narrating how her interest started after choosing it as a thesis topic when she took her master’s degree.

She said that a child dies of malaria every second and stressed that this is the reason why mosquitoes should be studied.

“It’s killing the lives of the people,” she said.

“Children are dying because of dengue and I really have to look into it, to study deeper and then find ways on how we can contribute in addressing this problem because it involves lives,” Greif said.

The Filipino Faces of Biotechnology Award was conducted by DA-BPO in time for the National Biotechnology Week held annually in the last week of November. It is given to Filipino individuals who have contributed to the advancement of biotechnology in the Philippines. (JDF)