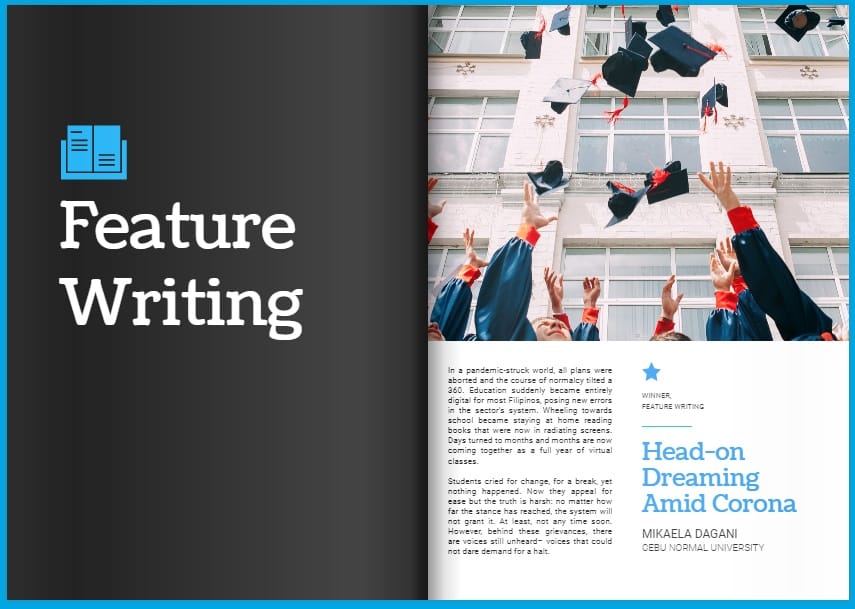 The ongoing global crisis didn’t stop Ang Suga Publication, the official student publication of Cebu Normal University (CNU), to gain recognition as they attended this year’s University Publication Congress last April 17-20, 2021.
Mikaela Jane Dagani (BA Literature III), the managing editor of Ang Suga, bagged the winning spot for the Feature Writing contest with her entry entitled “Head-on Dreaming amid Corona”.
The winning piece displayed the aspirations that keep a student going despite the challenges of new normal education.
In an interview with Ang Suga, Dagani said that she was relieved that the contest was done individually because she was worried of collaborating online to craft a piece.
When asked about how she felt after the winners were announced, she shared, “Grateful kaayo ko and I thought it was such a good time to thank the people nga nakauban nako ever since, to show them I owe it to them also.”
Along with Dagani, the event was also attended by several Ang Suga staff who participated in other categories like editorial writing, editorial cartooning, and photography.
Initiated and hosted by Author Solutions Philippines, the event is an annual gathering of student publications from different colleges and universities within and outside Cebu to compete with their artistic and writing prowess as their weapons.
Words by Jamaica Ola-a
Screenshot by Jhonazel Kiskis