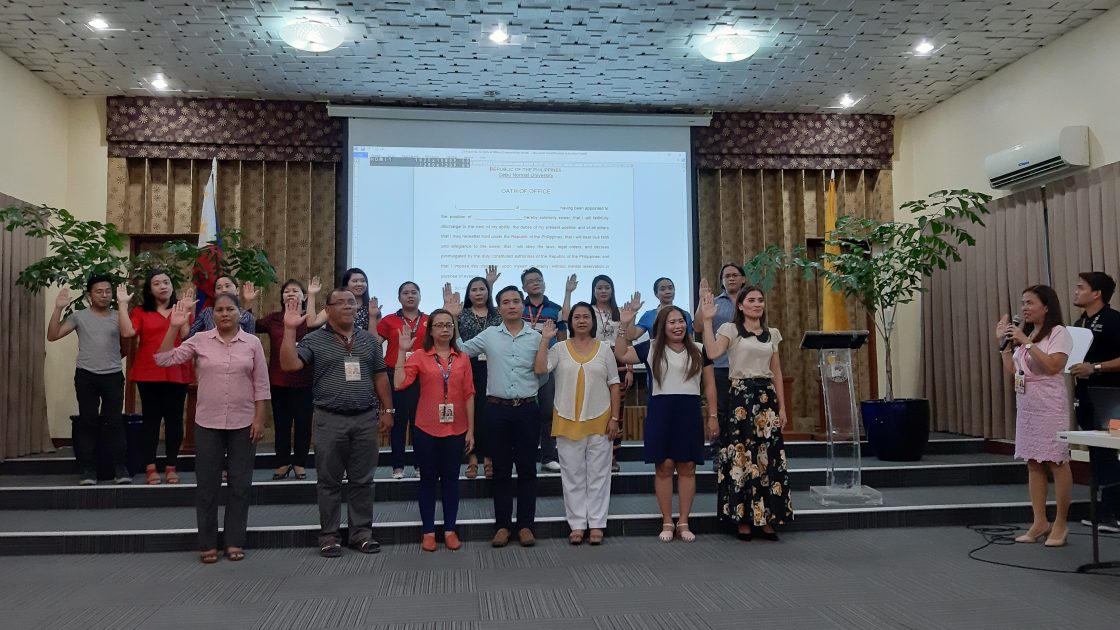 The oath taking took place last Thursday, November 21, 2019 at the CNU Tandang Sora Hall. It was done in batches and was administered by CNU President Dr. Filomena Dayagbil.

NBC No. 461 is an updated revision of the National Compensation Circular (NCC) that rationalizes the ranks, salaries, or advancement of qualified and deserving State Universities and Colleges (SUCs) faculty members. It is on its 7th cycle evaluation.

Based from the letter of DBM addressed to the CNU President, the position titles and salary grades of faculty members have been checked and verified from the Personal Services Itemization and Plantilla of Personnel (PSIPOP) Fiscal Year (FY) 2018, certified true copy of agency’s NBC No. 461 7th Cycle Evaluation Printout, and the Accreditation Report for Full-fledged Professors.

The Philippine Association of State Universities and Colleges (PASUC), together with DBM has started deliberating the scheme of upgrading and promoting faculty members in 1982 since SUCs before where exempted from the National Position Classification and Compensation Plans. It then paved way to the adoption and development of a Common Criteria for Evaluation (CCE) that aims to justify academic ranks and salaries. The circular through time has undergone a couple of amendments.

Mr. Kim Francis Rodriguez, who managed to climb up to the next rank in the latest NBC cycle, said in an interview that he is very happy with the long awaited implementation of NBC No. 461 cycle 7. He said that it has been marked final by their oath taking.

“As in honestly, very happy jud kaayo (ko)…it’s something that we’ve waited gyud for so long,” he said.

He sympathized with his co-faculty members who were waiting for two years for the NBC 7th cycle to take effect. The evaluation took place in 2017 but is implemented in the last quarter of 2019.

He said that the process of waiting made him lose hope, but now things have finally changed. He said that he is now more motivated to do his job as his pay could now somehow compensate his workload. He said that he looks forward to the next cycle. (JDF)