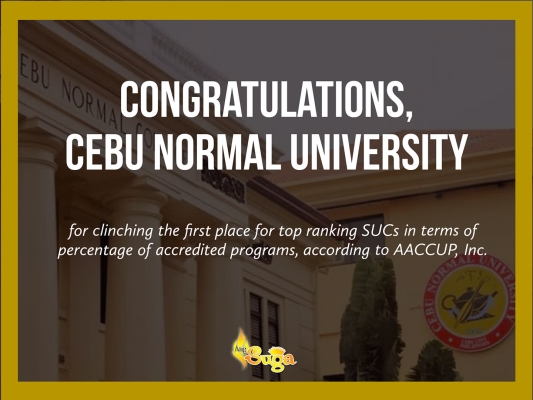 With a hundred percent rate, Cebu Normal University (CNU) clinched the first place for the top ranking state universities and colleges (SUCs) in terms of percentage of accredited programs, according to the Accrediting Agency of Chartered Colleges and Universities in the Philippines (AACCUP), Inc.

The ranking was presented in the agency’s annual publication, “Consolidated List of Institutions and Programs Granted Accreditation Status, 1992-2019”, which is an unabridged abstract of institutions and programs accredited from 1992 to 2019.

CNU was also the only SUC from Central Visayas to make it to the list.

Organized in 1987, AACCUP’s main function is the accreditation of curricular programs in the Philippines, particularly for state universities and colleges.

The said agency is a member of the National Network of Quality Assurance Agencies, Inc. (NNQAA); Asia-Pacific Quality Network (APQN) which is based in Shanghai, China; International Network of Quality Assurance Agencies in Higher Education (INQAAHE) based in Barcelona, Spain; and Council for Higher Education Accreditation-International Quality Group (CHEA-IQG) in Washington, D. C., United States of America.

Photo grabbed from The Wires