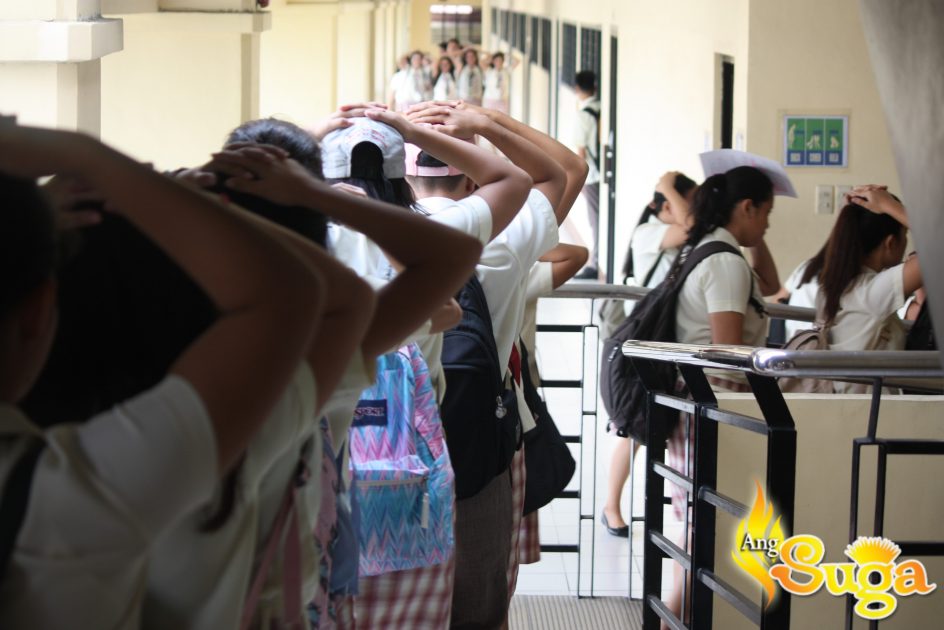 The drill focused on the evacuation process and took place in CNU grounds reaching the sidewalks, where the students had performed its expected protocols.

It was divided into two phases this year, with the morning as initial execution for the students from Integrated Laboratory School (ILS) and College of Arts and Sciences (CAS) for the first half, and the College of Teacher Education (CTE) on the second; while the afternoon was allotted for the unified earthquake drill followed with an evaluation attended by guest evaluators from the Cebu City Government-DRRM, Lapu-Lapu City Government (LCG)-DRRM, Base Camp Emergency Response Team (BCERT), and some barangay tanod from Brgy. San Antonio.

During the assessment, Mr. Nagiel Bañacia, an officer of LCG-DRRM said that the drill’s “ultimate objective” was to “teach people to be resilient” especially in the wake of disasters.

Meanwhile, Mr. Joseph Inosante, co-founder and Chairman of the Board of BCERT, pointed out the lack of resources such as radio, personal protective equipment (PPE), and signage in the university, and challenged to invest especially on PPE in the future.

“The students cannot be empowered without the support of the teachers and faculty members. The students were religiously following the ‘duck, cover and hold’ but the teachers did not,” he noted.

However, in an exclusive interview with Ang Suga, Inosante said that the earthquake drill was “much better, more organized, and more prepared” compared to the past and “just needs to polish more and work on it.”

In another interview, Mr. Joseph Sol Galeon, CNU-DRRM Presidential Assistant, shared that the recommendations were points that they have to “work on”.

“We will review the recommendations individually and personally, I will identify which of those will be prioritized. I will address individually the priority item that needs immediate response,” he said.

The students have also expressed their support for the drill through their participation.

One common misconception on earthquake drills that take place in academic institutions is that it is assessed to conclude whether it has passed or failed.

“It’s more on points to work on so that in times of calamities we will be resilient, or at least we are prepared. In terms of disaster drill, what is important is that everyone is prompted on the things that they need to do better on times of calamity. It’s a lesson on progress,” Galleon explained.