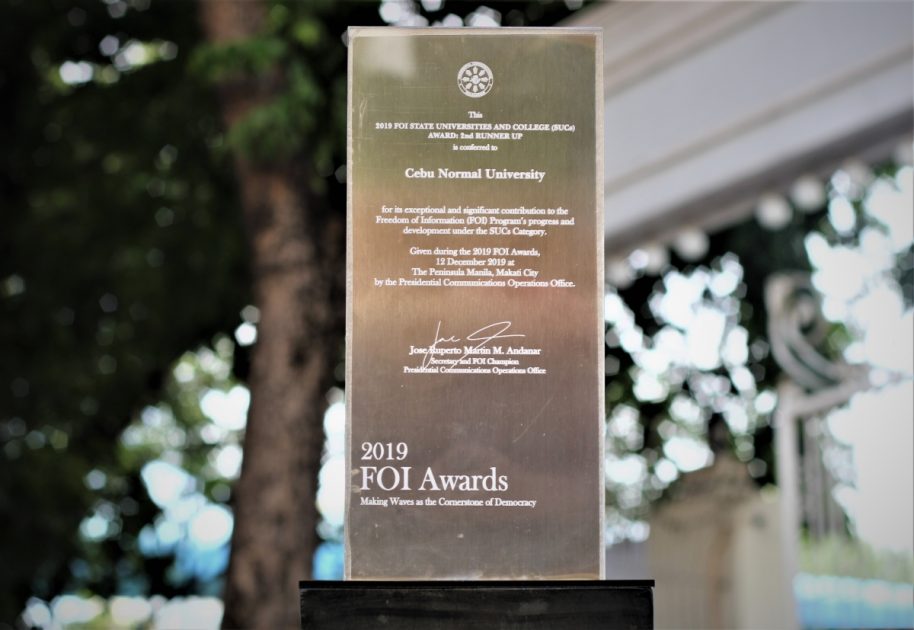 CNU is 2nd runner-up for the 2019 Freedom of Information (FOI) Award – State Universities and Colleges (SUCs) Category and is the only school in the Visayas to be part of the finalists this year.

CNU received a plaque of recognition conferred by the Presidential Communications Operations Office (PCOO) during the 2019 FOI Awards held on December 12, 2019 at The Peninsula Manila, Makati City.

It was organized by the FOI-Project Management Office (FOI-PMO) under PCOO.

There are five categories for the awards given to recognized departments, agencies, government-owned or controlled corporations, SUCs, and local water districts. There are three nominees per category.

On the SUCs category, the Kalinga State University-Main is 1st runner-up while Eulogio “Amang” Rodriguez Institute of Science and Technology (EARIST) is the Champion. Both schools hail from Luzon.

The FOI award is given to government institutions who showed exceptional and significant contribution to FOI program’s progress and development in pursuance to Executive Order No. 2, series of 2016 which mandates government institutions’ transparency of public service for national development. It was approved and signed by President Rodrigo Roa Duterte on July 23, 2016.

The giving of FOI awards is on its third year now which started in 2017.

CNU has extended its assistance to the FOI program as host during the conduct of the FOI Workshop for librarians on August 9 and the 2019 PCOO Roadshow and Campus Caravan which took place on August 27.

Public Information Officer Kim Francis Rodriguez who received the award on behalf of CNU said he’ll continue advocating for the programs of FOI by improving the services of PIO. He said FOI is important to fight corruption and is a basic criteria for good governance.

“The right to information is every Filipino’s basic right,” he said. (JDF)