Cebu Normal University (CNU) is the only Philippine university with its own exhibit in the Quacquarelli Symonds  (QS) Higher Education Summit: Asia Pacific 2022 held on 8-10 November 2022 in Intercontinental Jakarta, Pondok Pinang, Jakarta, Indonesia. Other than the exhibits, the summit featured workshops and interactive panels by experts in the academe for innovation with the theme, “The Next Big Thing: Addressing new opportunities and existing challenges in APAC higher education”.

The QS Higher Education Summit exhibits provided an avenue for CNU to showcase the offerings of its colleges primarily in the areas of instruction and research. The delegation was led by Director Naila Y. Beltran of the External Affairs and International Linkages Office with Dr. Michelle Mae J. Olvido (Presidential Assistant for Planning and Development) and Dr. Laurence L. Garcia (Board and University Secretary and Director for the Research Institute for Ageing and Health). With 237 universities from 39 countries participating in the summit, CNU was able to enter into preliminary discussions for possible partnerships with 34 higher education institutions to add to the university’s efforts toward internationalization.

At present, CNU is undergoing assessment using the QS stars rating system to better understand its competitiveness using international rating and benchmarking which was made possible with the support of the Commission on Higher Education (CHED) through the Fostering World Class Philippine Universities Project Grant in the amount of Php 2.5M. § MMO 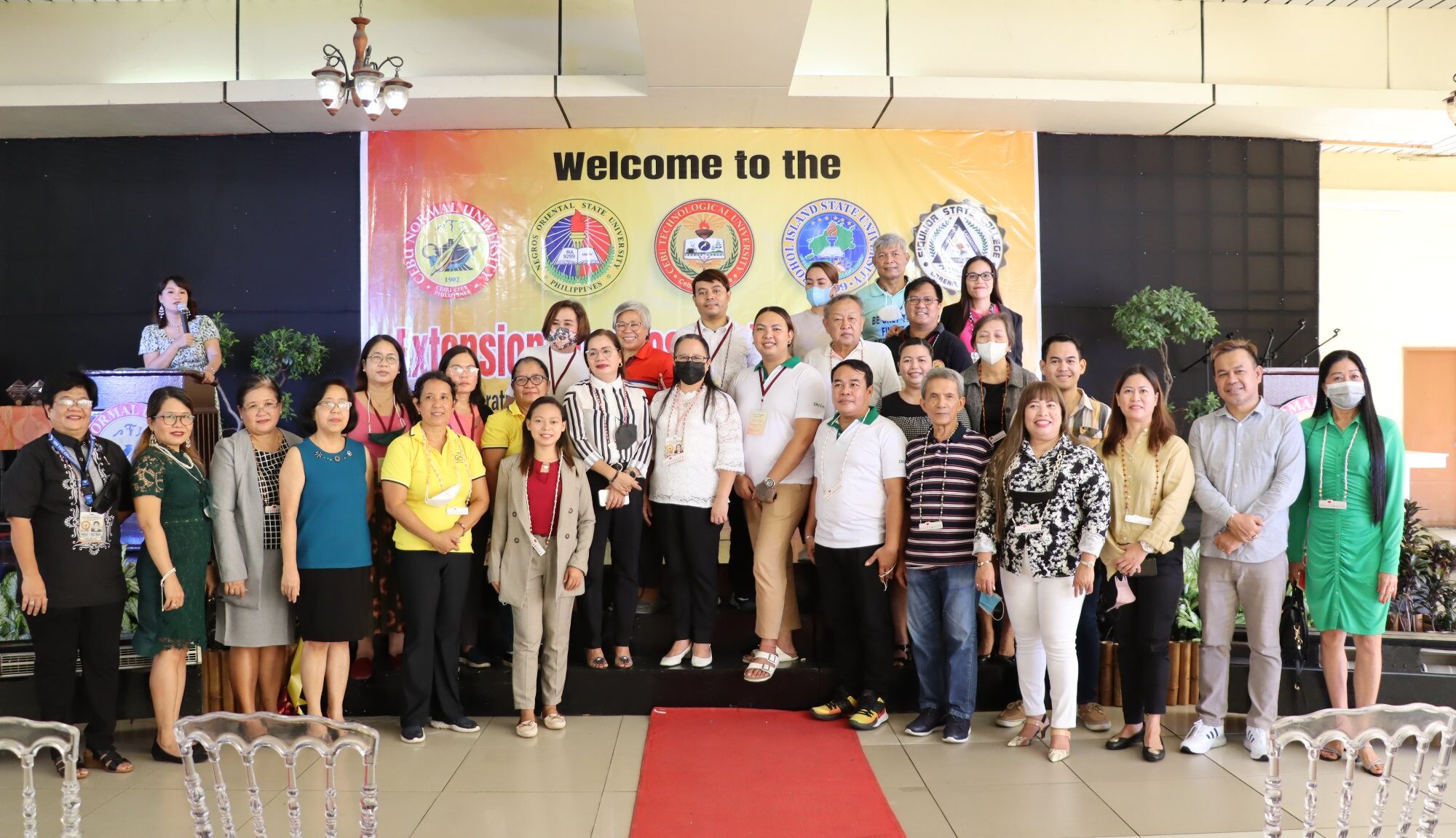 Cebu Normal University’s (CNU) – External Affairs and International Linkages (EAIL) Office, in association with the College of Arts and Sciences (CAS), initiated an Extension Congress with its first Regional State Universities and Colleges (SUCs) Fair at Samuel MacClintock (SM) Hall last October 27-28, 2022.
The two-day event focused on the theme “Celebrating Success: Capacity Building and Innovation in Empowering Communities”, and aimed to establish stronger partnerships among SUCs in the region and prepare for the annual National SUC Fair organized by the Commission on Higher Education (CHED).
Five SUCs in the region including CNU, Cebu Technological University (CTU), Siquijor State College (SSC), Negros Oriental State University (NORSU), and Bohol Island State University (BISU) gathered to exhibit products from their extension projects.
Various local products were displayed from the designated booths highlighting CNU’s accessories from “One Bead at a Time”, CTU’s collection of handloom fabrics, NORSU’s framed collages made from dried leaves and flowers and BISU’s food products.
In an interview with NORSU’s Director of Innovation and Technology Support Office, Dr. Johann Heinrich P. Malongo stated he was fortunate enough to represent their school at events like the Extension Congress 2022.
“You will have the chance to showcase what you have back in your institution. It is indeed a great fora and venue to inspire others and gain wonderful insights and best practices from other Universities as well,” he said, commending its success.
On the second day, awards were given to the following: CNU for the Best Educational Product, CTU for the Best Booth, BISU for the Best Agri-Food Product, and NORSU and BISU for the Best in Scientific Product.
CNU’s “One Bead at a Time” extension project also won the CHED Choice Award and Best in Entrepreneurship last October 7, 2022, in the Education, Health, Environment, Livelihood, and Peace (E-HELP) Life Festival. §
Words by Lera Jane Camangyan and Donna Rose Egos
Photos grabbed from CNU and CNU-PIO Facebook page 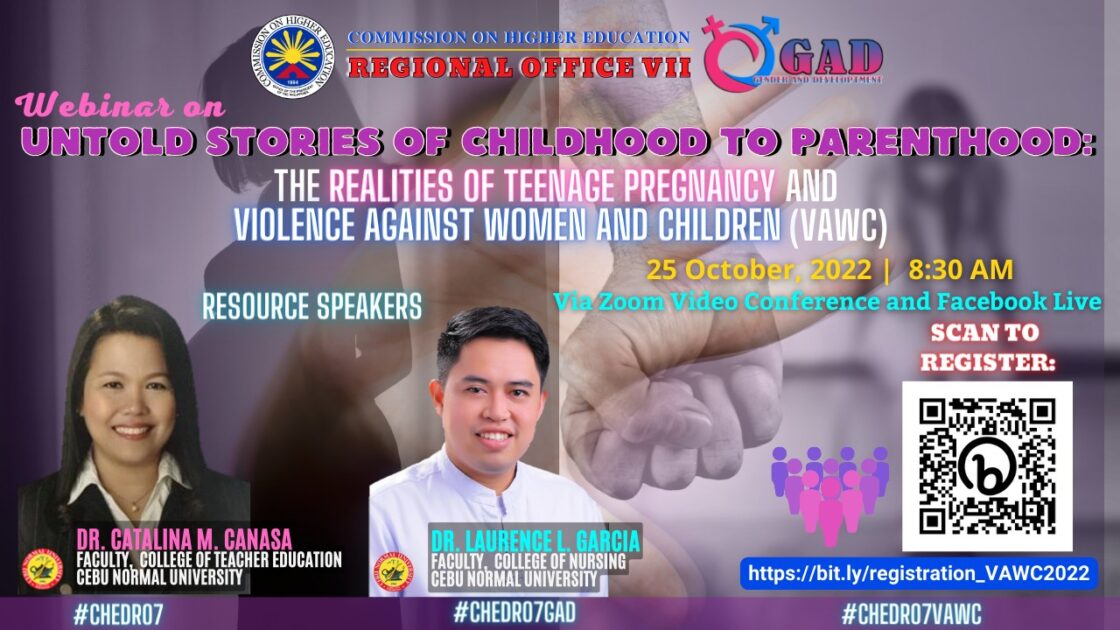 “It is easier to build strong children than to repair broken men.” – Frederick Douglass
The Commission on Higher Education (CHED) Regional Office (RO) VII initiated a webinar to spread awareness and information on teenage pregnancy and violence against women and children (VAWC) yesterday, October 25, 2022, via Zoom and Facebook Live.
With the theme “Untold Stories of Childhood to Parenthood: The Realities of Teenage Pregnancy and Violence against Women and Children,” CHED RO VII aimed to continue its fight by educating the 13,000 registered participants from various higher education institutions (HEIs) of the provinces of Cebu, Bohol, Siquijor, and Negros Oriental.
“You may not need the information today, but the knowledge today could save a life tomorrow,” CHED RO VII’s Regional Director Dr. Maura Consolacion D. Cristobal stated.
Meanwhile, Dr. Laurence L. Garcia, Cebu Normal University’s (CNU) secretary and the board’s Officer-in-Charge (OIC), faculty of CNU – College of Nursing (CN), and the Founding Director of Research Institute for Aging and Health graced the occasion as the first resource speaker.
He highlighted how adolescent pregnancy in the Philippines calls for a national emergency, followed by a presentation of a study conducted by his team that aimed to uncover the realities of teenage mothers in Cebu City.
To end his discussion, he quoted Franklin D. Roosevelt, “We cannot always build the future for our youth, but we can build our youth for the future.”
Movement against domestic violence
Dr. Catalina M. Canasa, a fellow faculty member from the CNU – College of Teacher Education (CTE), a writer, and a research adviser attended as the second resource speaker.
Canasa shared her own experience of domestic abuse from childhood and different ways to possibly stop or prevent domestic violence.
“We have the choice. Mayroon tayong karapatang pumili upang gawin nating maunlad ang ating buhay,” Canasa added.
Additionally, she went on to discuss protective legal measures while simultaneously urging the participants, especially those victims, to change their fate by actively fighting violence in their own way.
In his closing remarks, CHED RO VII’s Education Supervisor Program Specialist Dr. Josefino E. Ronquillo said, “Every individual is a gift and need not be abused but has to be loved and cared [for].” §
Words and Screenshots by Kimberly Keith Gonzaga and Marjuice Destinado 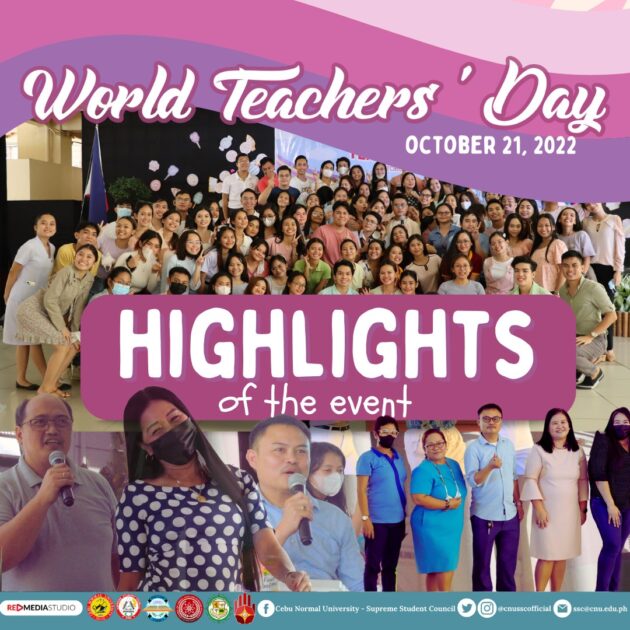 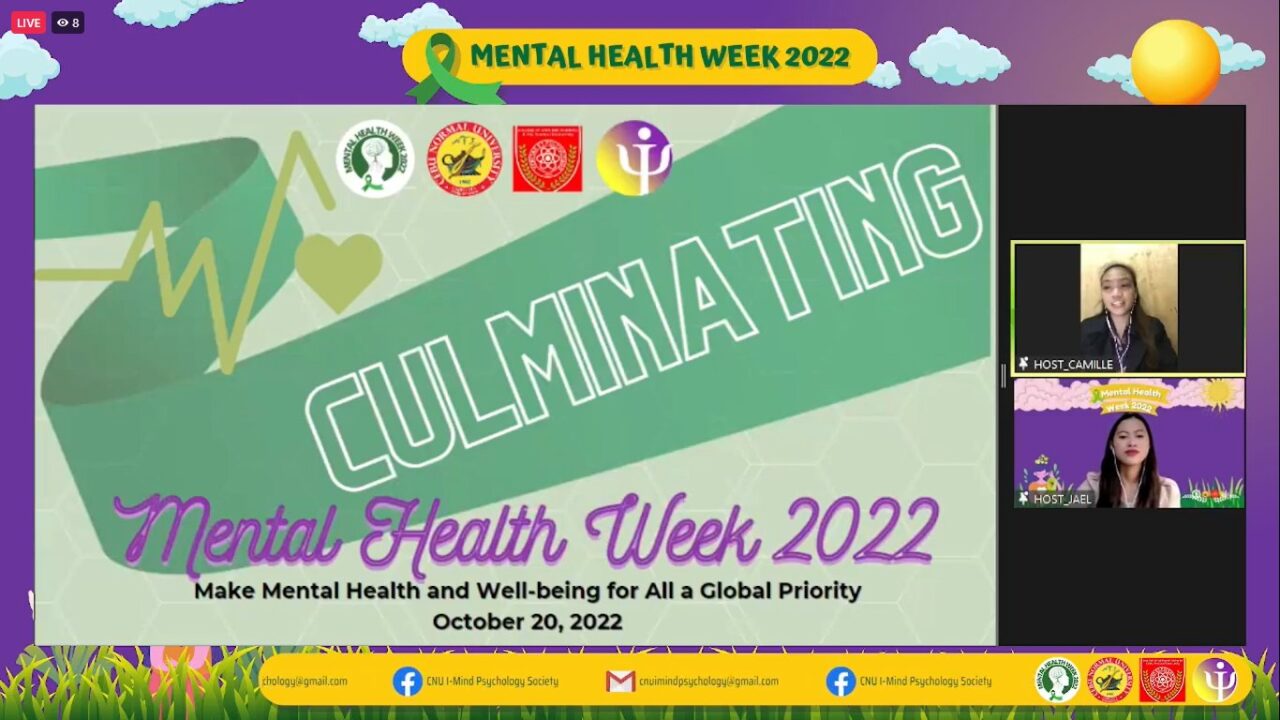 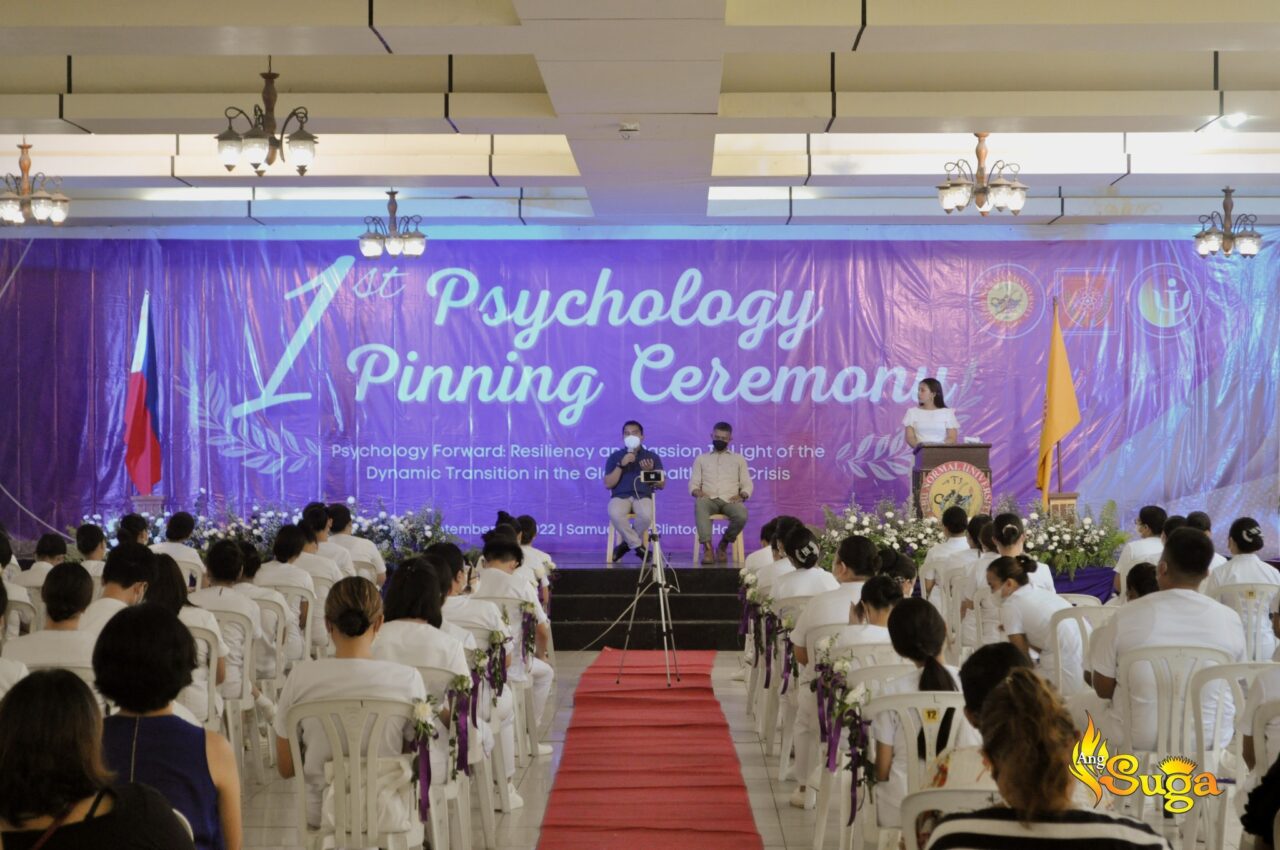 Fourth-year Bachelor of Science in Psychology (BS Psychology) students basked in the spectacle of a milestone as they became the pioneering batch of Cebu Normal University’s (CNU) 1st Psychology Pinning Ceremony held yesterday afternoon at Samuel MacClintock (SM) Hall.
With the theme “Psychology Forward: Resiliency and Passion in Light of Dynamic Transition in the Global Healthcare Crisis”, the event is a kick-off celebration before the participating students are deployed as interns.
The Pinning Ceremony started with the hues of white parading the red carpet in the Processional of senior Psychology students.
In his welcome address, Mr. Jose Rey M. Ocat, faculty of the Psychology Department, stressed that the event should be a remarkable memory because they managed to reach the ceremony despite the severe effect of the pandemic.
The first keynote speaker, Mr. John Villanueva, described his experiences as a former addict who became a pastor at the House of Hope, one of the oldest rehabilitation facilities in the South, in his discussion on “Clinical Psychology in the Workplace”.
“Rehabilitation centers are only existing because of one problem – addiction,” Villanueva emphasized.
The second keynote address was delivered by Mr. Semhre C. Quijano, a CNU alumnus, and a certified lean sigma yellow belt. He talked about the different problems that fall within the spectrum of industrial psychology, including in this time of the new normal: the sinking state of employee engagement and sense of belongingness at work.
During the open forum session, a student voiced concern regarding the Human Resources (HR) department. Quijano addressed the issue and emphasized that future HR practitioners should have the skills to implement “strong leadership program training where the people know how to choose a good leader.”
Pinning proper, CAS outlook
Accompanied by their proud families, the pinning proper transpired as the senior students individually walked up on stage to accept the symbol of their transition from being students to interns. This portion of the program was then succeeded by the Students’ Pledge led by Mel Torrence Senerpida (BS Psychology IV), I-Mind Psychology Society mayor.
Senerpida shared with Ang Suga that the first Pinning ceremony’s conceptualization started as early as June and was inspired by the conduct of other departments’ pinning ceremonies and face-to-face graduations.
“All we hope is that this first in the department becomes a tradition in the years ahead,” he added.
Meanwhile, when asked about how it felt to participate in the first pinning ceremony, Razsha Laurana Nakila (BS Psychology IV) shared that it was an honor for her to be a part of what would become a momentous chapter in the history of CNU Psychology and glad that the school acknowledged her degree program through this event.
Sealing the ceremony, Mr. Genesis Dejan, Department Chair, left an insightful message to the senior students that can be easily recalled through the acronym CAS; C for practicing competence, A for being adaptive, and S for service.
“I want to also challenge you guys to be with the tasks that you have in a more competent way […] We need to be adaptive with the different possible changes, possible conditions wherever we may be in the industry […] This profession wouldn’t actually be alive, wouldn’t be born without service,” Dejan said.
He went on to say that as aspiring mental health professionals, they must always be pouring service; doing and giving their extra mile in serving others because that is what the program is all about. §
Words by Rena Mae Avila and Jamaica Ola-a
Photos by Nicole Marie Dumayac 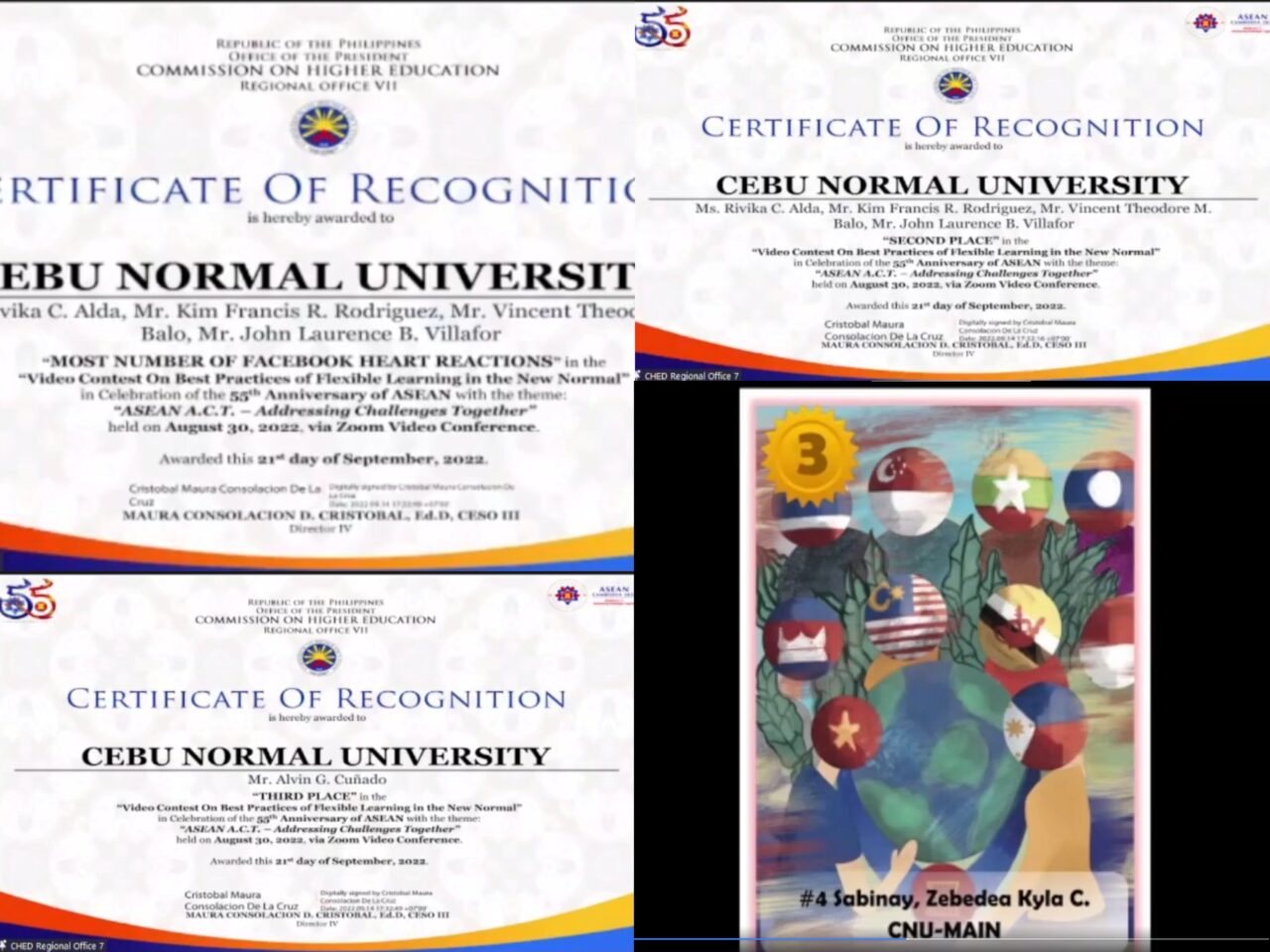 In line with the 55th Founding Anniversary of the Association of Southeast Asian Nations (ASEAN), the Commission on Higher Education (CHED) Regional Office (RO) VII initiated a series of competitions joined by participants from higher education sectors in Bohol, Cebu, Negros Oriental, and Siquijor.
With the theme “Unity Amidst Diversity as One Academic Community”, the month-long festivities wrapped up with a Regional Awarding and Culminating Ceremonies held last September 21, 2022, via Zoom and Facebook Live.
Officer-in-Charge of the Deputy Executive Director Office IV and Director of the International Affairs Staff (IAS) Atty. Lily Freida C. Macabangun-Milla, CESO IV graced the activity as the resource speaker.
“I would like to extend my gratitude in appreciation for all the efforts of CHED RO VII that they have poured into the events… I am confident that CHED RO VII will do great work of bringing ASEAN closer to more and more stakeholders and provide venues to foster fruitful partnerships among our higher educational institutions,” Milla said.
Per the video contest’s theme “Best Practices of Flexible Learning in the New Normal”, the fourth entry jointly created by Normalite faculty and staff Dr. Rivika C. Alda, Dr. Kim Francis R. Rodriguez, Dr. Vincent Theodore M. Balo, and Mr. John Laurence B. Villafor secured the second place and the popularity award for the most number of Facebook reactions.
Meanwhile, the second entry prepared by Mr. Alvin G. Cuñado came in third place.
Made on the day of the competition, Cebu Normal University’s (CNU) Zebedea Kyla C. Sabinay (Bachelor of Science in Biology major in Environmental Biology IV) secured the third spot for the On-The-Spot Digital Poster Making Contest.
“I only had a short time to prepare for the contest… The piece I made clearly illustrates that these 10 countries gather together around the globe, implying development, camaraderie, and good relationship with each other,” shared Sabinay. §
Words by Reina Aureo and Jonaren Eran
Screenshots by Jonaren Eran 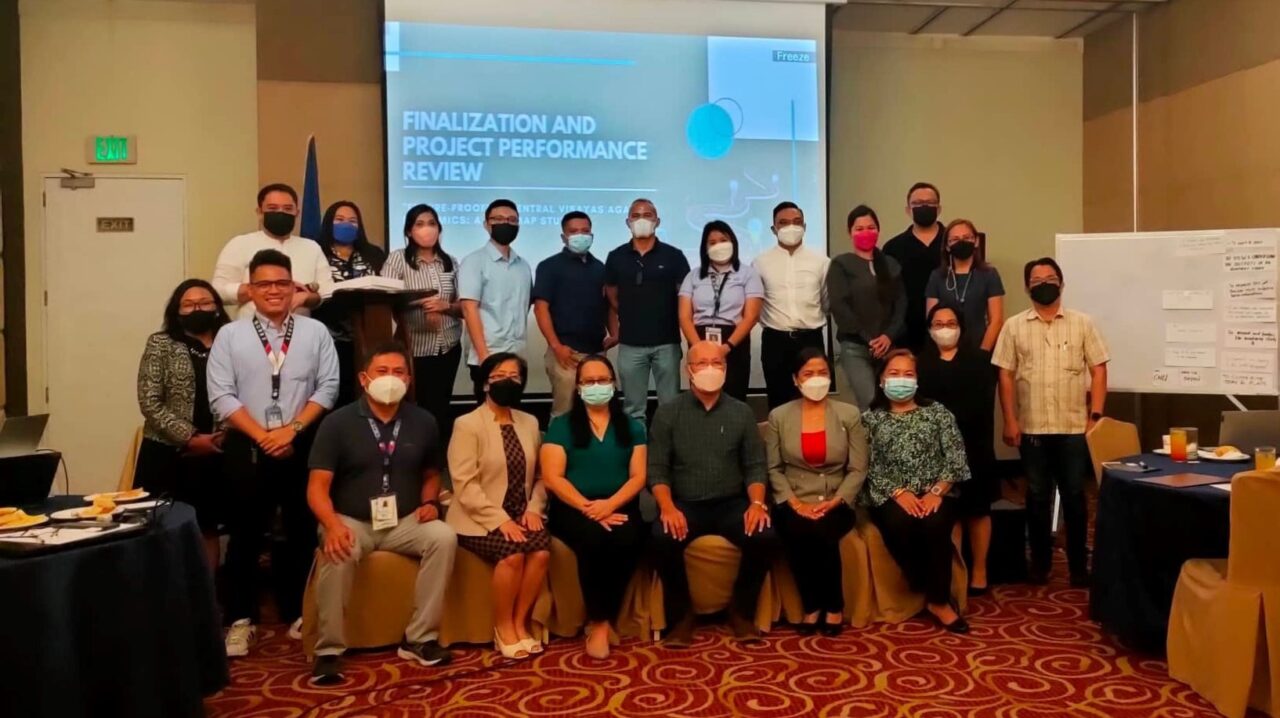 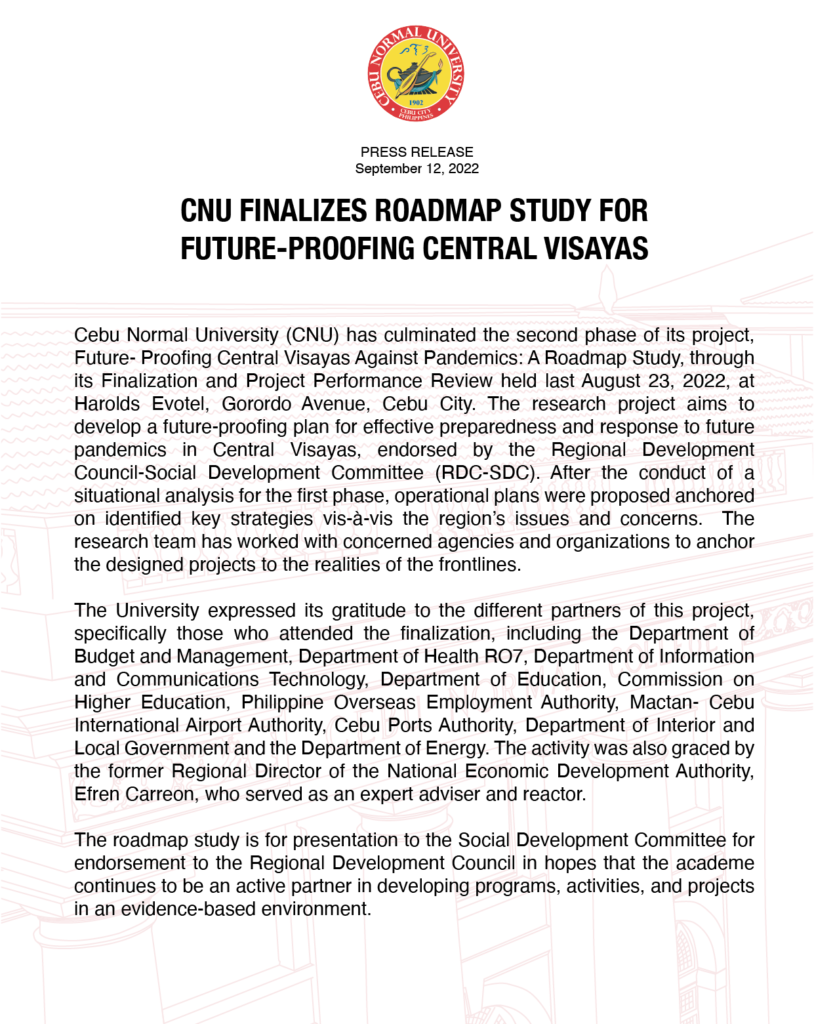